Reaching Millions With A $0 Budget - What We Learned (Part 2)

Hi, my name is Pat Walls, and along with Armin Ulrich and Melanie Massinger, we launched the biggest indie startup event in history.

Launching this event was both fun and sort of insane, so I wanted to write a post about everything and reflect a bit. I will try to go into as much detail as I can on how this crazy idea came about and how we executed on it.

The event was called the 24 Hour Startup Challenge - a hackathon/challenge where participants from around the world could showcase their skills by launching a product in 24 hours and win cash prizes. 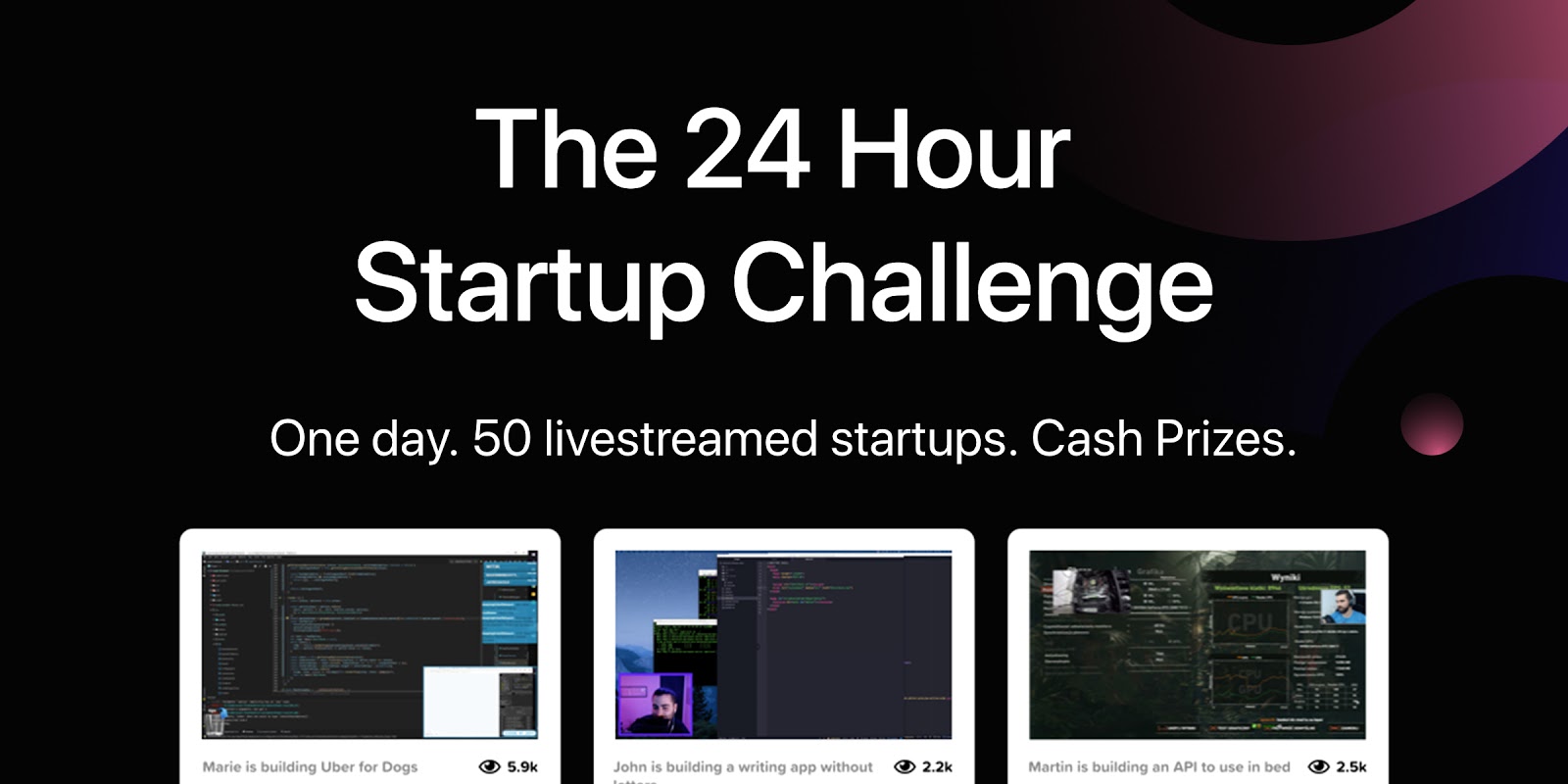 Building a massive app in 10 days

Not only did we work hard to promote the event, but we built a world-class website that would run the whole event.

Here are just some of the amazing features Armin & Melanie designed and built in one week:

User profiles (bio, Twitch username, Twitter, what you were building) 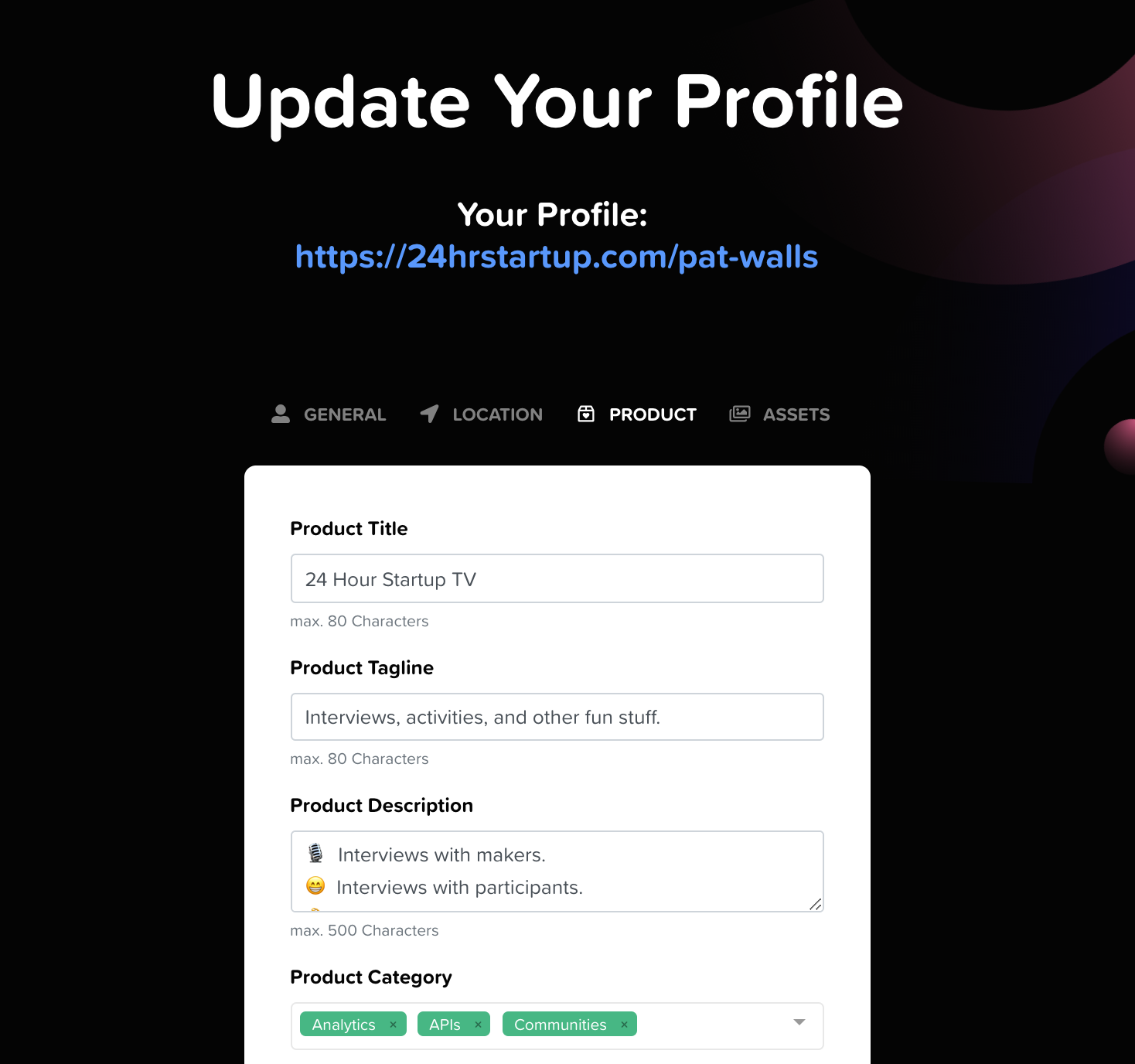 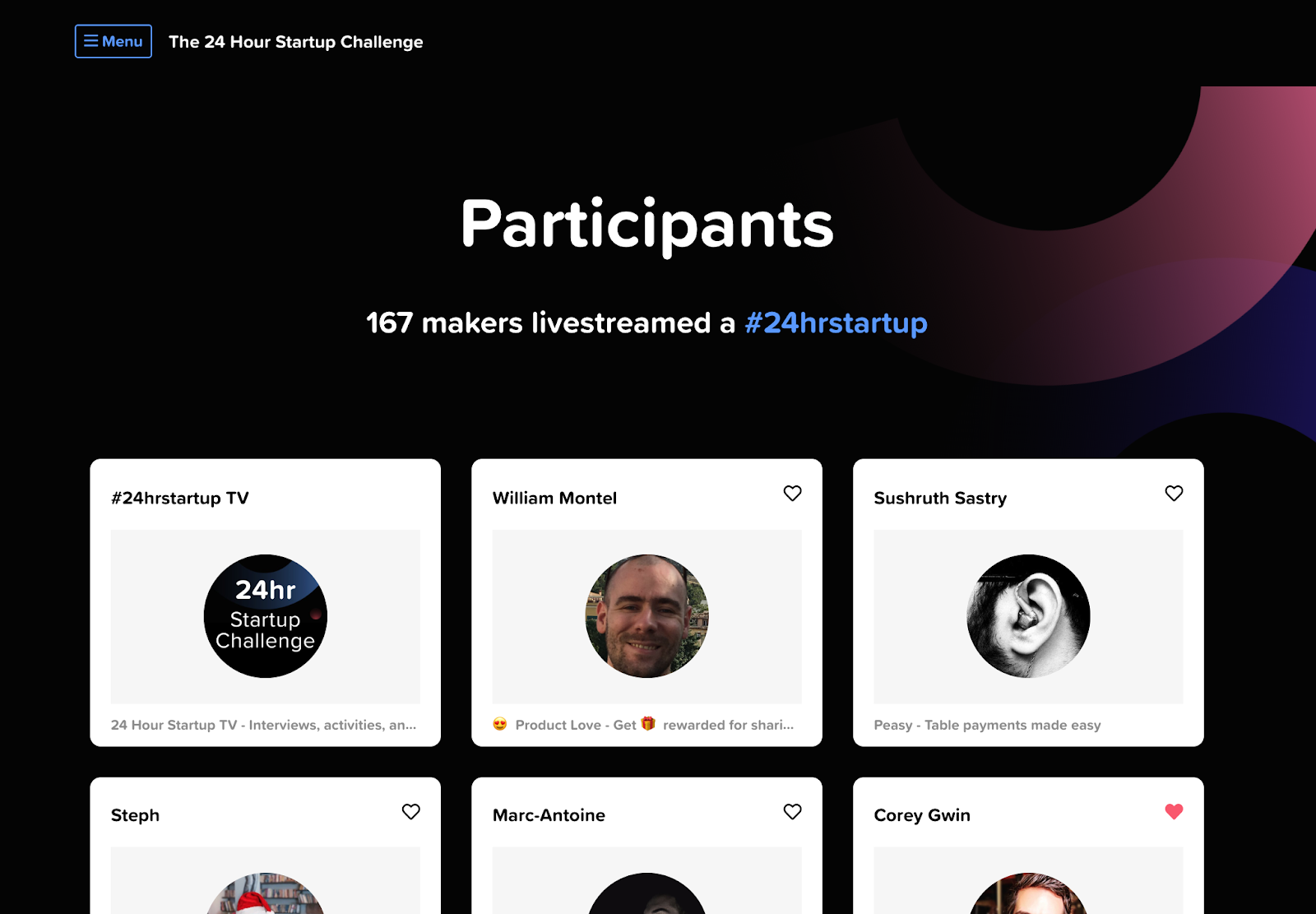 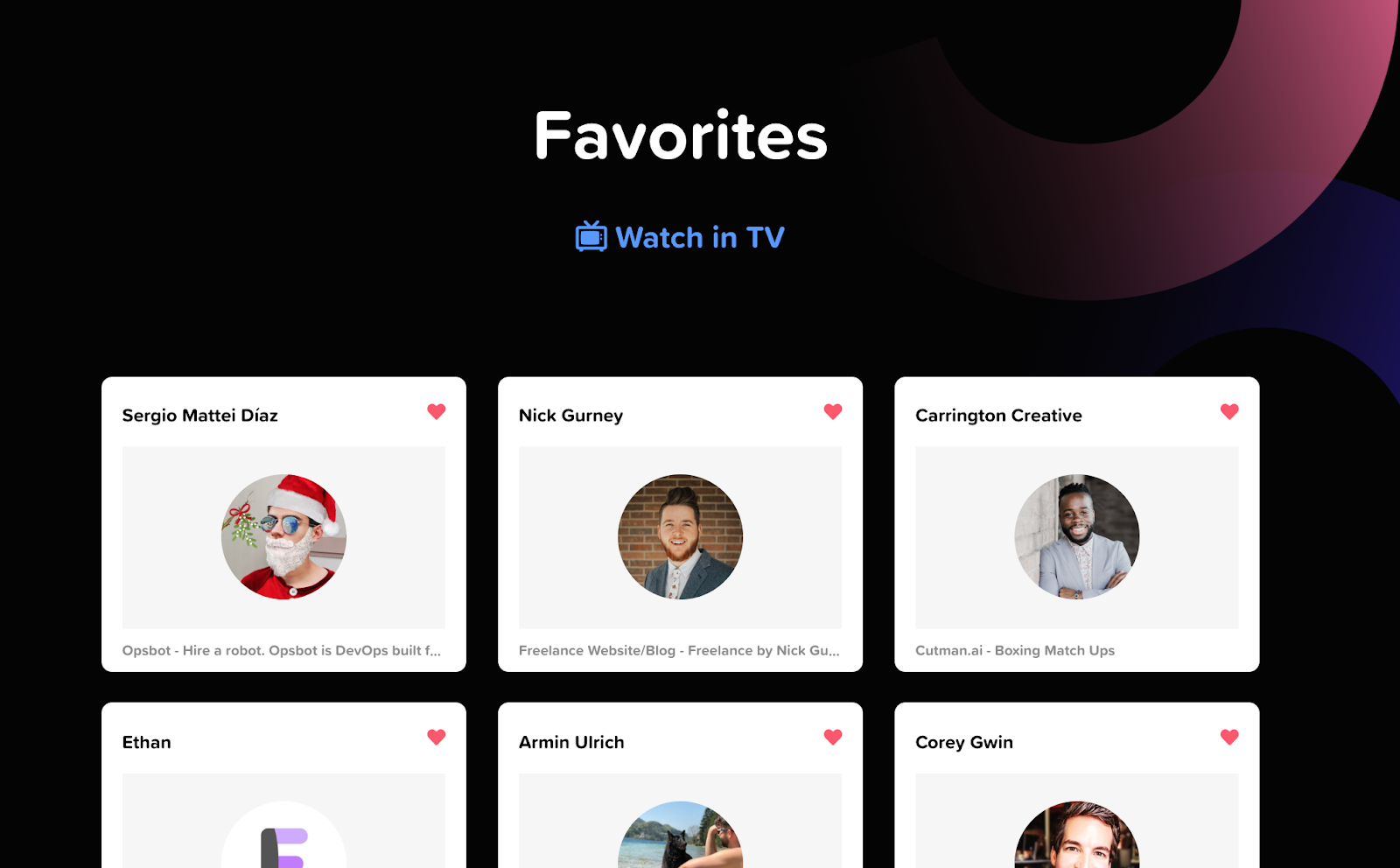 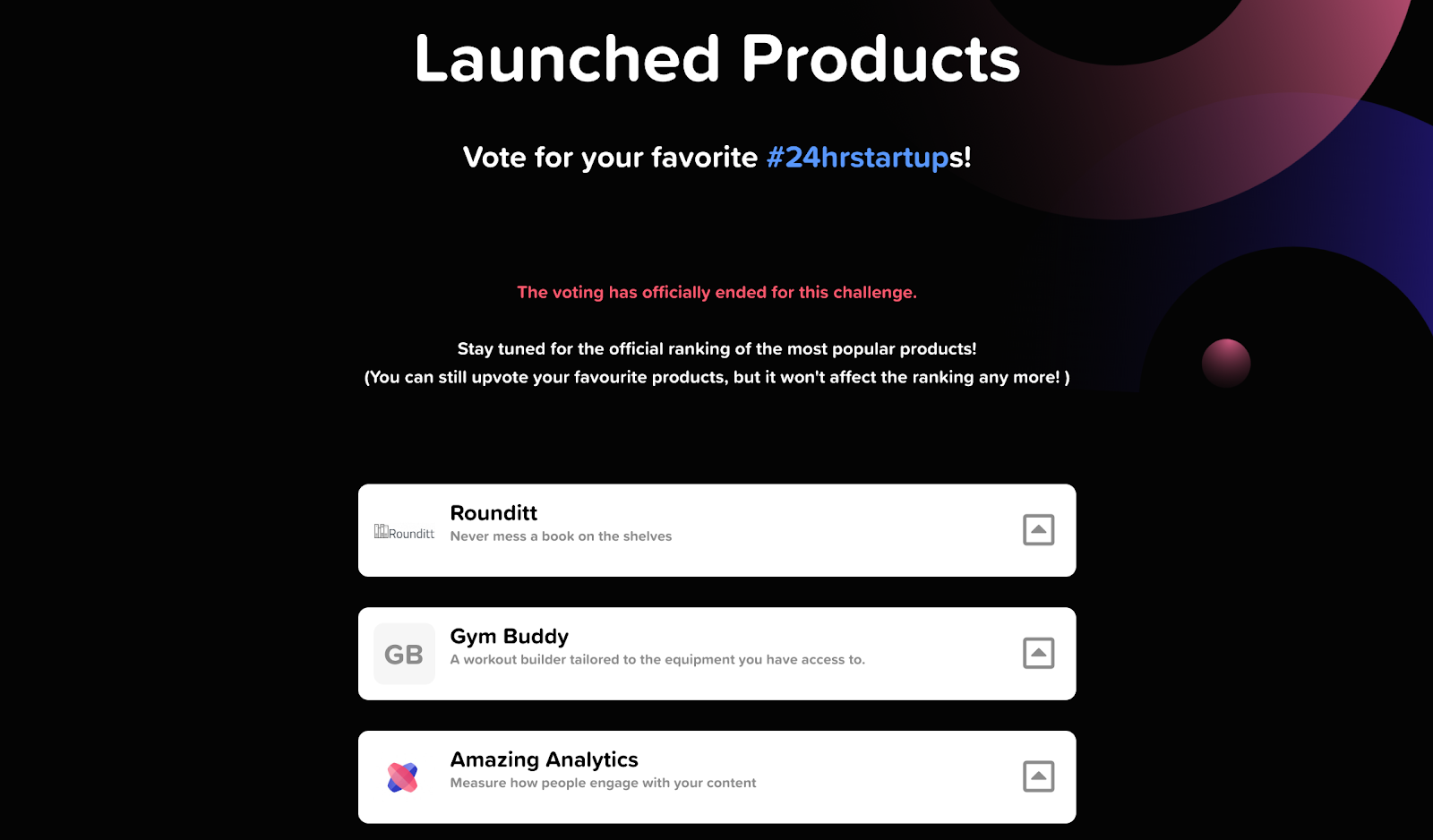 TV feature - watch many streamers at once 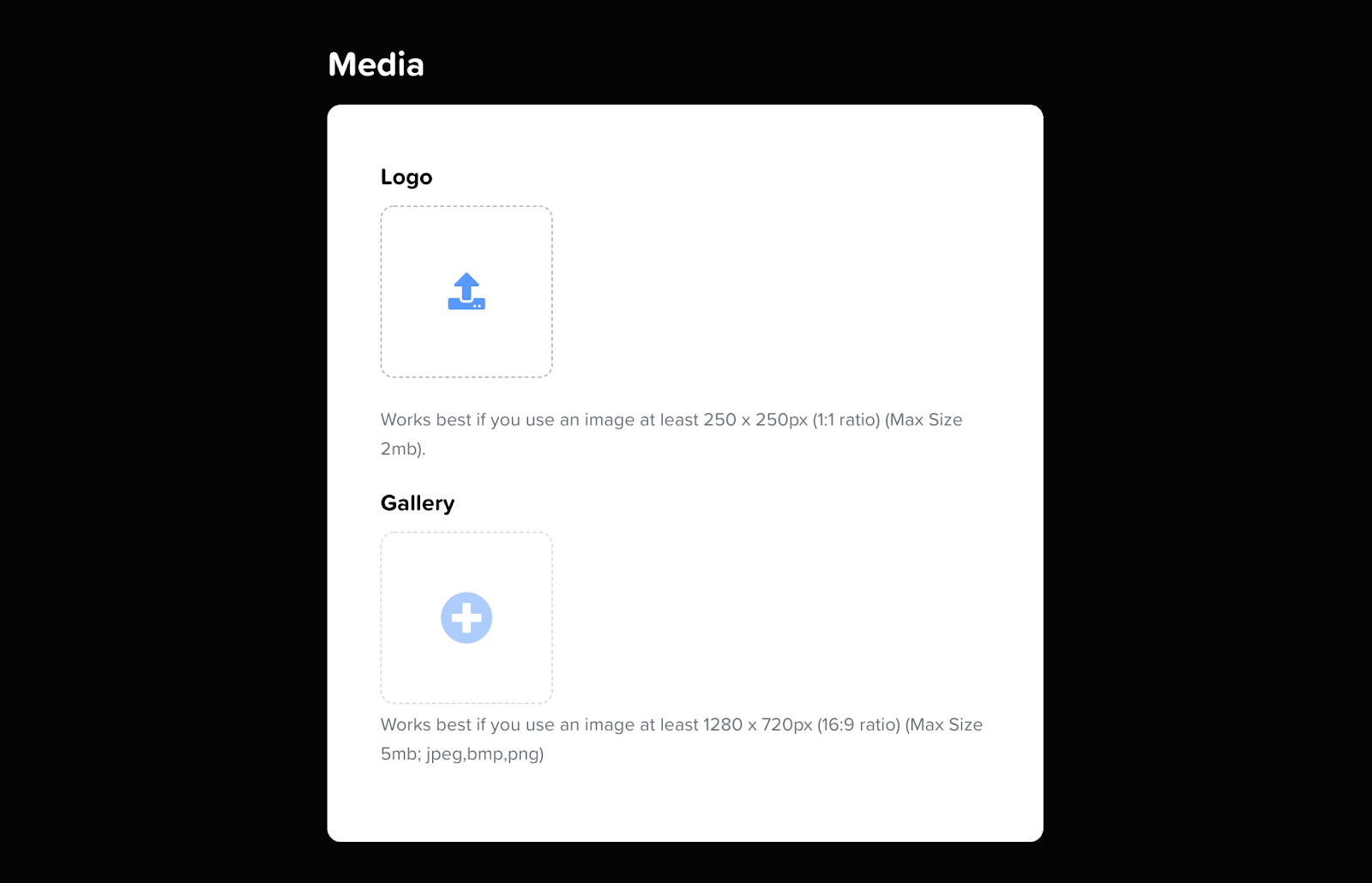 Building as we go

When we launched the landing page, we had no idea we would even build half of these features.

We built all of these features as we went. This was great because (1) we built features based on feedback from users and what we needed and (2) launching features was another marketing tactic.

As the event got closer, the hype reached a crazy climax and, admittedly, I can barely remember anything from that time.

I just remember working crazy hours and getting pulled in 1,000 directions - just trying to keep up with everything and stay afloat.

Tweets, mentions, emails, everything was just off the Richter scale as all participants were excited for the event to get started.

The challenge has begun

I’ve already written so much and the event hasn’t even started yet!

THE 24 HOUR STARTUP CHALLENGE HAS BEGUN

For the next two days, hundreds around the world will be launching a #24hrstartup on @Twitch.

The biggest live maker event of all time.

All of a sudden 13 streamers were already online:

Then suddenly we had 60 streamers online.

After we launched the landing page, we continued to think about how we could make the event more entertaining.

Although it’s cool to watch people code, we needed something a bit more tangible for normies.

We played around with a bunch of ideas, and just a few days before the event, we came up with the idea to have a “main live stream” - where I would moderate the event and do interviews with famous people in the industry live.

We wanted to do this for a couple reasons:

I was sort of nervous about this too, from a personal standpoint. It would mean interviewing many people that I am a big fan of, in front of hundreds of people, and it was live!

But I also wanted to conquer this fear of mine and become a better interviewer.

So I put together a list of people I wanted to interview and started DMing them. Surprisingly, many people said yes! I was not expecting that. Many of the interview slots were on the weekend, which I thought would turn people away.

After coordinating and scheduling the interviews, we announced it on our typical Twitter fashion, and even created a “lineup” list - like one you would see at a festival - again going above and beyond!

For #24hrstartup I'll be running a special live stream...

And of course, I gotta talk about the haters.

We planned to post the event on Reddit and Hacker News while it was going to drive more traffic to the event.

While Hacker News drove a ton of traffic for us, I actually got a bit depressed from some of the comments in those threads. 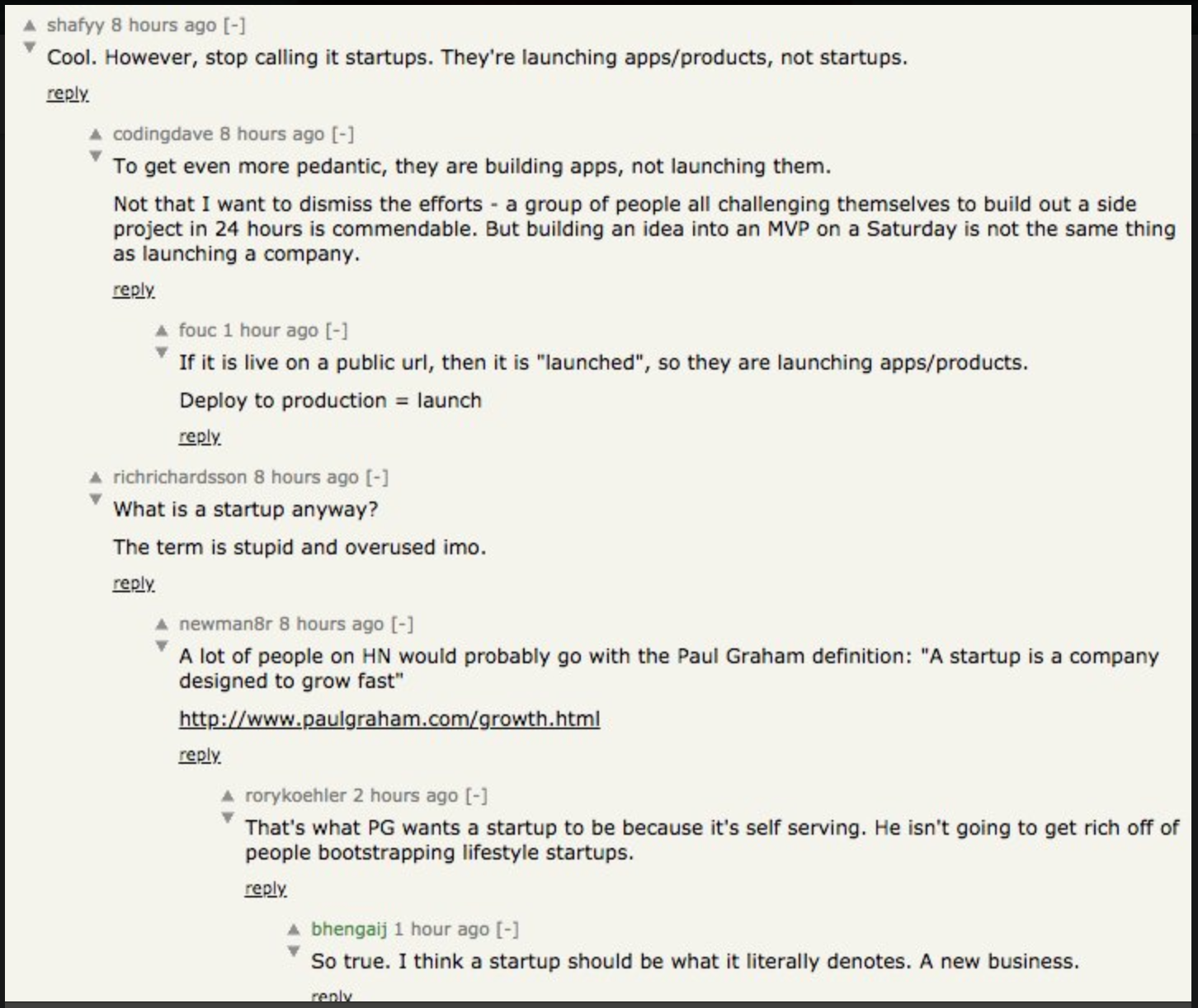 The thing that makes me the saddest is that most people argued about definitions and names instead of talking about this unique idea of a live-streamed hackathon that we worked so hard on.

But then we got some nice responses from the community that made me feel a bit better:

The easiest way to see if you're part of the new wave is if you get flack for challenging definitions.

A guy in havard did a stupid little app where you compared 2 photos of students - took him a weekend to built it
Then he built the next thing in 2 weeks.
He called it facebook

Imo big ideas are born out of many stupid little ideas
Who cares if someone calls it a startup or not.

It was a whirlwind

To be honest, the event (for me) was a giant blur. I was doing back to back interviews and was so tired that I don’t remember much.

All I know is that it was a massive success!

So how did we do?

Here are some of the stats from the event:

I can barely wrap my head around this...

Here are the 91 startups launched during the #24hrstartup

Analytics from the #24hrstartupTV stream

To divvy out cash prizes, we decided to go with a user voting system.

We did this for a few reasons:

We left the voting open for a week, and then announced the winners. You can see them in this thread:

And here they are...

THE WINNERS OF THE 24 HOUR STARTUP CHALLENGE

Remember, this money is just fun. If you launched a product (or even attempted a launch) - you did something worth MUCH more than $1,000.#24hrstartup

Everyone was talking about it

Before, during, and after the event, it felt like EVERYONE was talking about it.

This community is obviously just a small bubble on Twitter and a few websites, but from my (skewed) perspective it was all the discussion on there.

I was getting tagged all over the place. Indie Hackers, Product Hunt, Twitter, Medium, etc.

We even had people talking about it at an Indie Hackers meetup in London. 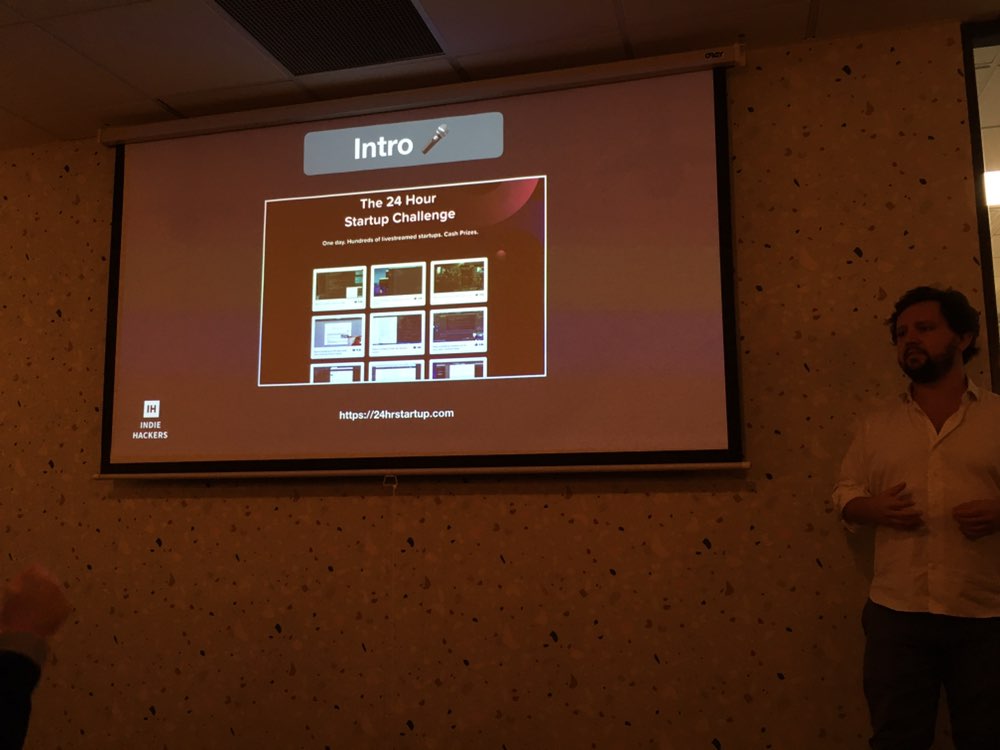 Although getting press like TechCrunch totally failed, we did get some nice press from Hacker Noon, Toptal, and from many Medium articles: 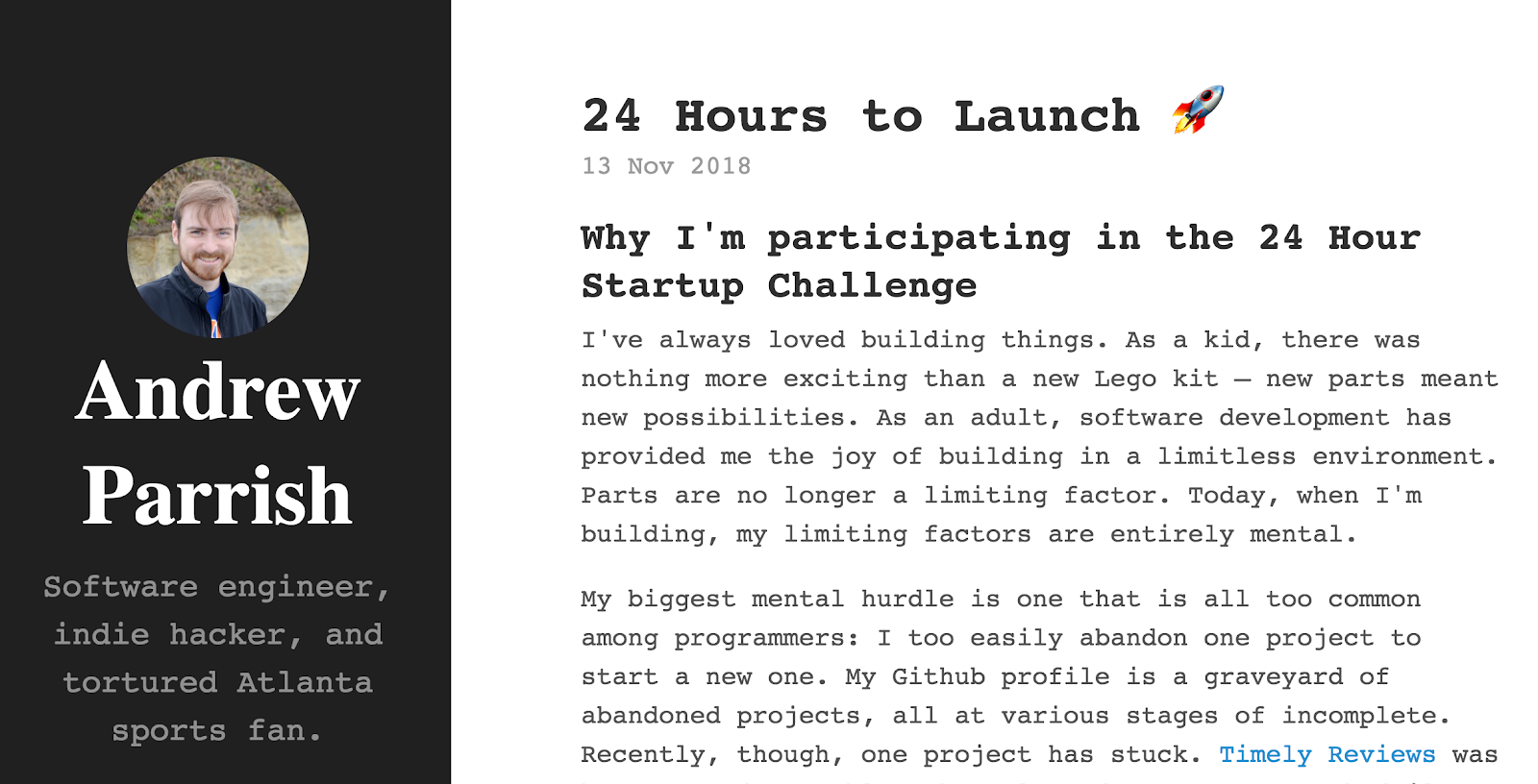 We did a survey!

After the event, we also decided to send out a survey to all participants (thanks for the idea Andreas Klinger).

Since everything was so crazy, we wanted to see how we did through anonymous feedback.

Here’s a couple screenshots from the survey: 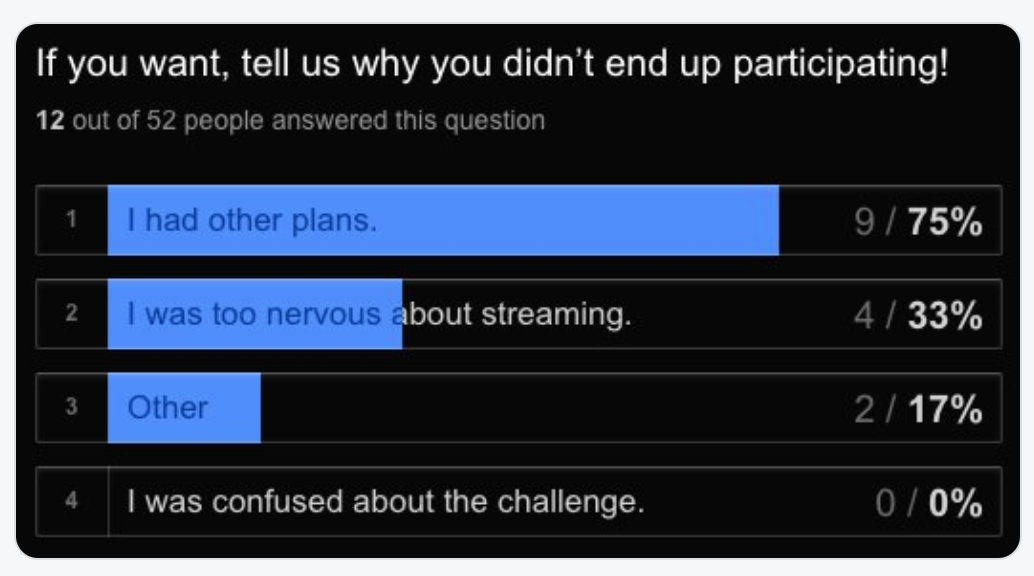 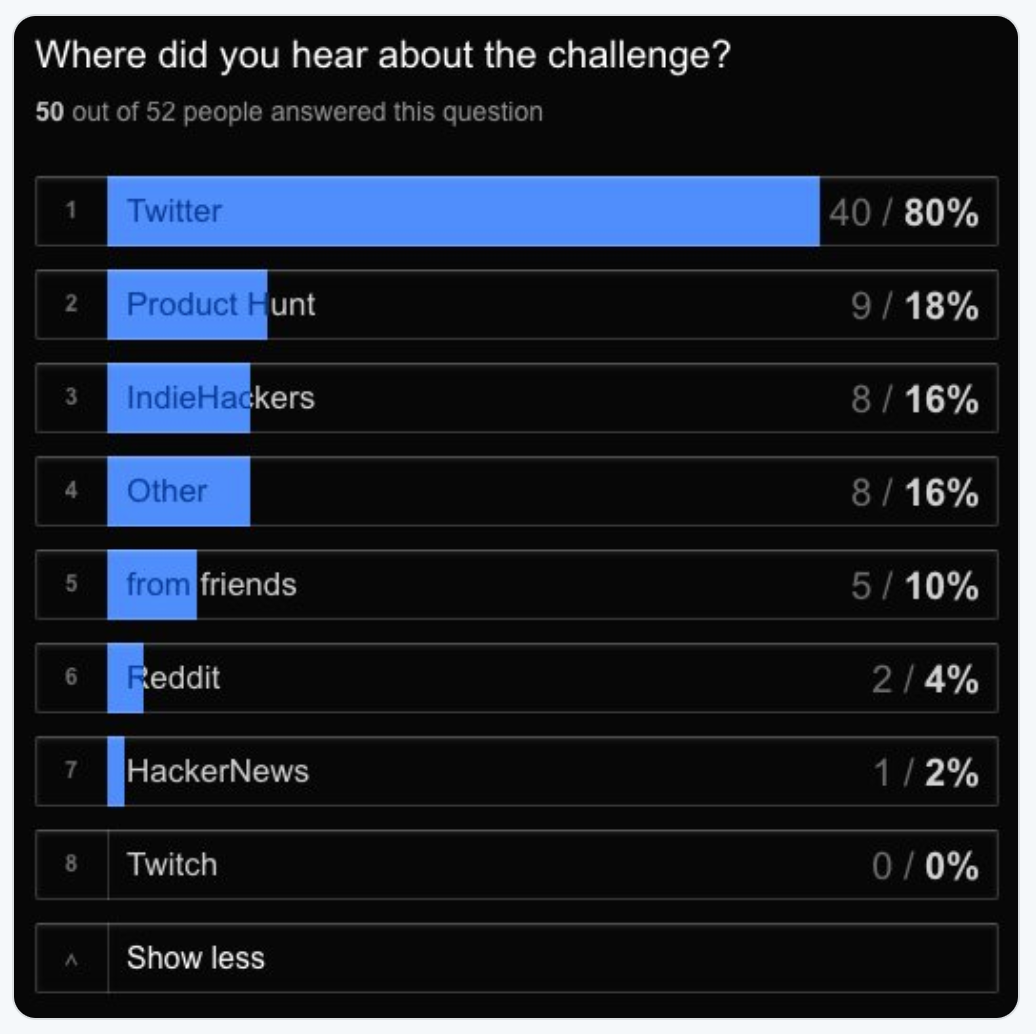 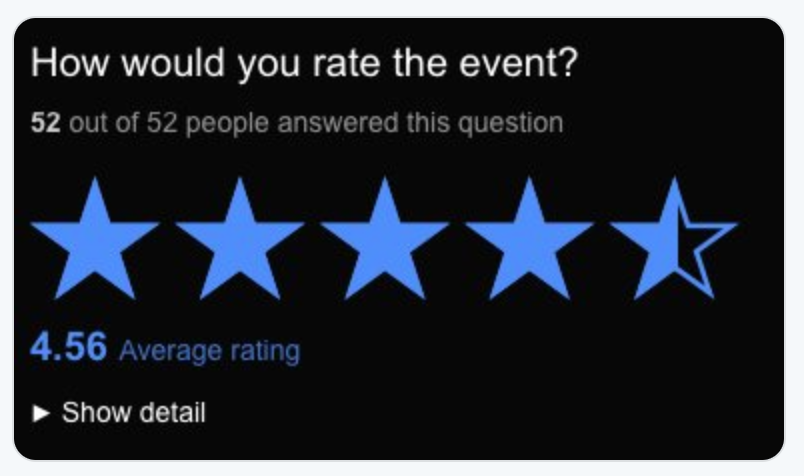 Very happy with those results.

Not only did we launch a successful event, but we created a community of people with the same values as us, that all get along in a nice way.

What did people launch?

Check out the tweet above to see the winners, but I wanted to note some of my favorite startups and stories from the event!

There were so many that were launched!

Now that the whole thing is over, I want to reflect on what we learned!

If something is working, go all out. We did everything we could possibly do based on the time we had to make the event as big as possible.

Based on calculations of our hashtag #24hrstartup - tweets from this event had 5 million impressions!

And that’s not even counting the tweets that did not use the hashtag.

Twitter is just so damn good for something like this - the discoverability benefits of the platform are unparalleled.

Every time we tweeted an update, we would reach more people, and our tweets were hitting the timelines of MANY people in the tech community.

Then, as we realized we had something, we carefully built hype around the event every day.

We continuously released new exciting information about the event, whether it was the increase in cash prizes, the sponsor announcement, 24hrstartup TV, announcing the winners, whatever.

Every (seemingly mundane update) became a small PR event for us. This allowed us to keep the attention of people before, during, and after the event - a span of many weeks.

We purposefully made the event planning process open and public - people loved following the story, watching us grow, and feeling a connection to something that started out so small.

You can’t do it all yourself

Many makers preach the benefits of running businesses solo.

As a solo founder, I agree and understand many of those benefits, but boy am I happy to have done this as a team.

This event would be nothing without a team. If you’re planning on running something like this in the future, I suggest doing it with someone else.

You don’t need to know all the rules

When you’re planning an event that has never been done before, there are thousands of unanswered questions.

For this whole process, we were learning as we went. We didn’t know how we wanted to do voting until the final days. We didn’t finalize 24hrstartup TV until the day before. We built all of the features of the website on the fly.

We just had a “we’ll figure it out” mentality and were purposefully vague with many of the rules and details about the event.

We had to do this to protect ourselves and be able to make changes for the better of the whole event.

Do business over email & DM

As I’m doing more business with “real” companies, I’m getting more fed up with people that want to “hop on a call”.

I agreed to a few phone calls with potential sponsors that never panned out. Waste of time.

All successful business for the event was done over email / chat / DM - which is really awesome in my opinion.

And on that note, I would say Twitter DM is more effective than email in getting a hold of people. Just something I noticed.

After the success of the event, we sat down to talk about the future of the 24 Hour Startup.

It was a massive success, but what comes out of it?

We are joining forces and launching Shipstreams - a platform and community where makers ship live.

If you want to get into streaming, come join us!

Why you should join Shipstreams?

We are soon launching our events feature - where you can run an event like this all on your own and reach thousands of programmers, designers, and entrepreneurs.

Send me an email if you’re interested at all.

Learn more about livestreaming as a maker and how it can help you be more focussed. Keep shipping with us!

Stay in the loop! 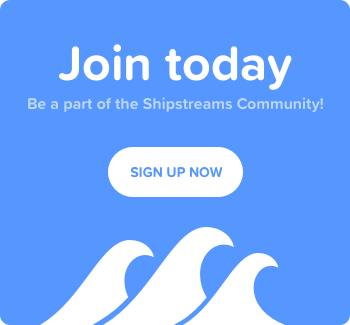